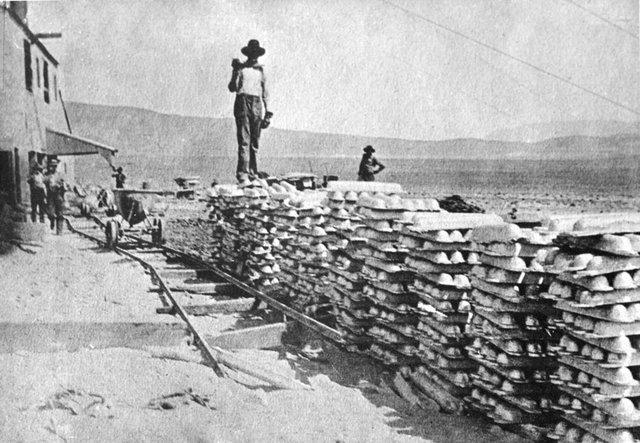 During the last period of glaciation in the Sierra Nevada the nose of the glaciers reached into the Owens Valley only to be melted by the desert heat. The run off from the melting glaciers filled the low spot in the valley and overflowed into Death Valley. Owens Lake remained behind as the last glaciers melted. Owens Lake was deep enough to be used to transport bullion and supplies for the mines at Cerro Gordo aboard two steamships, the “Bessie Brady” and the “Mollie Stevens”.

During those early mining days of the 1870s. Owens Lake was 30 feet deep. Today Owens Lake is mostly dry. In the early 1900’s the city of Los Angeles diverted the freshwater streams that fed the lake into the Los Angeles aqueduct. With no feeder streams the lake water eventually evaporated, leaving the dry lakebed that you see today.

As the lake dried up, a discovery was made, the lake bed contained the minerals that are necessary to produce glass. Pittsburgh Plate Company constructed a plant on the shore of Owens Dry Lake off Highway 395 at Cartago. The lake is composed of many mineral, mainly sodium carbonate.

The different colors of the lake bed are bacteria and algae that grow in the saltwater shallows.

In order to abate the dust kicked up by the dry climate and prevaling winds the City of Los Angeles has been using several techniques, one of which is shallow flooding. The shallow flooding is once again bring shore birds to Owens Lake making. Read more about birding in the Lone Pine area.