The Great Earthquake of 1872 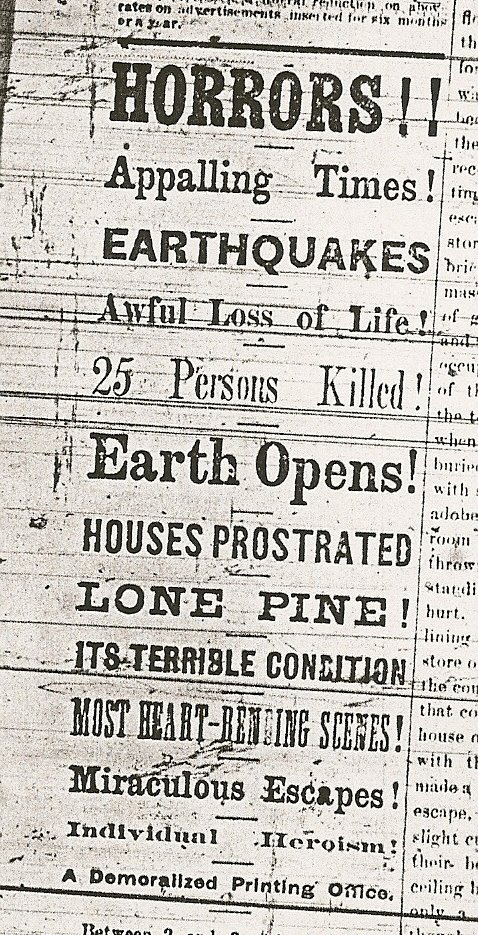 On March 16, 1872 at 2:30 A.M. the small community of Lone Pine, California was violently awakened by an earthquake. The magnitude of the quake was about the same as the “Big One” in San Francisco in 1906. It literally leveled the town of Lone Pine. Of the 80 buildings, built of mud and adobe, only 20 structures were left standing. Diaz Lake was formed by this quake.

Twenty-six people lost their lives that day in the disaster. A mass grave, located just north of Lone Pine, on the upthrust block of the main fault that caused the quake commemorates the site.

The landscape bears the scars of the 1872 earthquake. From Lone Pine to Big Pine remnants of the disaster are still in evidence. In the alley way behind La Florista, the local flower shop and nursery stands “The Old Adobe Wall” the only known remaining example of pre-earthquake architecture in Lone Pine. The wall is 21 inches thick, 148 inches long and 80 inches high. The bottom layer of the wall is three foot thick and built of heavy stone, the rest of the structure is adobe brick and rubble with brick mortar.

The wall is what is left of a general merchandising store and living quarters that was owned by Charles and Madeleine Meysan who came to Lone Pine in 1869 from a French Camp near Columbia. It is believed that the building was near 100 feet long, with the store in front and living area in the back. The Meysans had 10 children and prospered in Lone Pine. All was well until that early morning of March 16, when the adobe building the family was living in literally shook to pieces. The quake claimed the life of their daughter Alice. Shortly afterward, Meysan constructed a new building made of wood.

La Florista now occupies this building. The wall remained in the possession of various members of the Meysan family until September 30, 1921 when Eugenie Dunn sold it to O.W. Dolph. On December 22, 1931 the City of Los Angeles purchased the property.

The wall remained undisturbed for another forty years until one day a woman by the name of Elodie Drew, a granddaughter of Charles Meysan, received a phone call, the person on the other end wanted to bulldoze the wall. Elodie said ” I guess I sounded pretty mad, because they went and put up a fence around the wall”.

On August 6, 1971 the protection for the wall erected by the City of Los Angeles, Department of Water and Power was finished. Recently a dedication was held by the E. Clampus Vitus. For more information on the Charles Meysan family there are two splendid articles by Elodie Drew in the “Saga of Inyo Country.”